All of the 14 girls showed up to our home ground with positive attitudes ready for the game. The weather was perfect, and the sun was shining as well as everybody’s smiles.

First Half
We kicked off with some great passes and runs. Our defence was strong, and we did a lot of talking. With some great work in the middle by Ruby and lots of pressuring by Phi, Phi gave an awesome ball to Talya, where she had an awesome shot leading Sutherland up 1-0 in the first half.

We started the second half with some good work up front but unfortunately St George were able to get through our defence, drawing with Sutherland 1-1. We had some great runs down the sideline by Ant and Amelie and good defence by Kathleen but St George managed to get the ball just past our goalie to put themselves at 2-1. For the rest of the game Sutherland fought hard and had some awesome runs upfront but we were just unable to score another goal.

Unlucky today girls, with some hard training and effort hopefully we’ll come home with a win for next week. 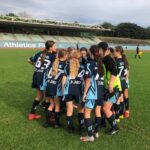 SSFA and the use of Social Media