Like many other volunteers, Matt commenced his football journey when his children signed up to play football with Bonnet Bay Football Club over 20 years ago.

Beginning as a manager of his children’s teams, then a sponsor of the Club, he eventually moved to the Bonnet Bay Committee where he served as Vice President and then President.

In his spare time, Matt has also filled the roles of Referees Coordinator, BBQ Coordinator, Council Liaison and Grounds Coordinator for his beloved Bonnet Bay Club.

Matt is a Life Member of Bonnet Bay FC.

Matt commenced his service to the SSFA as Judiciary Committee panel member. Following this, he joined the SSFA Executive Committee for several years before leaving in 2012 to become President of the Sutherland Titans Football Club (our Club who specializes in catering for players with special needs)

While the founders of the club had developed a wonderful concept, some administrative expertise was required to “steady the ship” and put them on the path to the outstanding success that they continue to enjoy, today.

In 2020 and 2021 Matt has overseen two Covid effected years but through his leadership and dedication, football in the Sutherland Shire has remained resilient

Matt has been involved, literally, in the grassroots development of the Sutherland Association, from the perspective of players, to mowing the grass, along with input and passionate involvement across all aspects of amateur football.

Matt’s contributions across two important clubs, as well as the Association, his engagement with the footballing fraternity, and commitment to bettering this sport, as well as the community, has seen Matt also receive Association’s (2012) and Football NSW (2019) Merit Award. 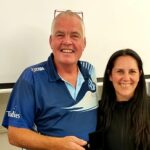