Proctor Cup this year was held on Saturday 6th and Sunday 7th of March 2021 as always at the immaculate Proctor park Complex in Bathurst.

We are given the title Sutherland Sky Blue in the under 14’s draw causing some immediate confusion among the parents about which strip we should wear on the first day. We started the weekend with a team dinner where we joined by the WPL17 squad at the Greens on William and old school bowling club – the girls had their first roll up of barefoot lawn bowls and quickly discovered that lawn bowls were much harder than soccer balls!! After a quick team chat we all headed home ready for our first game in the morning full of excitement but aware of the task ahead given we were playing up a year in the tournament.

Our first game saw us take on Blacktown City – we were a little nervous and this was eased when we learnt that our goalkeeper Indy had left her boots in Sydney and had to play the first game in coach Jono’s boots!!  We started strongly with our possession based style of play, being positive on the ball coming away with a 3-0 victory, it was then to the main pitch for a game with Lindfield the girls were exceptional in this game for another 3-0 win, our last game of the day was a 5.30pm clash with St George WPL14, they were a tough opponent and it  was a high standard game – we conceded from a free kick to go down 1-0. To the girls credit we rallied hitting the post 2 times and then a great save from their keeper saw us go down 1-0. We finished 2nd in our pool and would have to win our first match the following morning to proceed to the quarter finals.

Sunday morning saw an all Shire battle with the W14A girls from Lilli Pilli who had an amazing tournament winning all 3 of their games on the first day – in the end we were a little to strong winning 2-0, onto the quarters where we came up against Northbridge WPL14 team who were on fire scoring 18 goals and conceding 0 in their pool, the girls were up to the challenge with some resilient defending and unbelievable saves from Indy we hung in there and when our chance came with 30 seconds to go Miki finished beautifully for a 1-0 victory. The Semi’s had us up against Hills FA and the girls really stepped it up again in this game controlling the ball and sticking to our game plan of overlap runs we were able to secure a 1-0 win. The final game for the day and our 7th of the weekend saw us up against Albury Wodonga – the girls were all tired and against a bigger stronger opponent the girls did exactly what I asked of them and really stood up in the Final, it wasn’t a pretty game but sometimes finals aren’t and it comes down to courage and the girls stayed strong to the final whistle. The celebrations were loud and strong from parents and players!

We started the weekend with no expectations other than we wanted to play our style of football and we finished it Proctor Cup Champions for 2021 – an amazing effort by a great group of girls, a special mention to our keeper Indy who played for the 12’s and 14’s on the weekend and was amazing in every game, also a big thanks to the parents for their support and welcoming me to the team and lastly to BP who has done a great job with these girls for the previous 3 years. 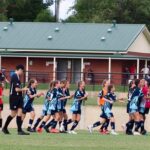 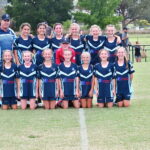 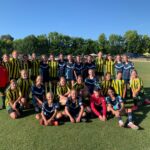 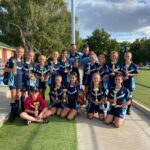