Northbridge Bulls FC found their scoring groove in their 5-2 success against Sutherland Shire FA this afternoon at Harrie Denning Centre.

The Bulls found their shooting boots to record their third win of the season. The visitors lead 2-nil at the break before they piled in three more to confirm their result. Coach Grant Lee will be pleased to see his side take their chances after some misses last week.

Last year’s Golden Boot Evelyn Chronis took center stage again with a hat-trick. Chronis has seven goals for the season to become the joint top scorer in the National Premier Leagues 2 NSW Womens. Rita Boateng and Hannah Beard also found the back of the net.

For Sutherland Shire FA, they were blown away in the first half. The home side did score twice in the second half to get on the scoreboard. Captain Genevieve Nisbet added another to her tally alongside Isabella Raad in the defeat. 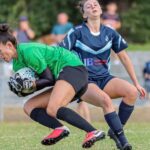