Sydney FC has shot up into second place on the A-League ladder following a 1-0 win over Melbourne Victory – their seventh win in a row against their Big Blue rivals.

An early Sydney FC goal was all it took for the Sky Blues to walk home with the three points and move into second place in the A-League after dominating large parts of the game.

Also present at the match representing the Sutherland Shire Football Association were young players from Caringbah Redbacks, St Patricks, Sylvania Heights and SSFA GSAP, participating as Player Mascots and playing at Half Time at the match.

Next up for the Sky Blues is the Sydney Derby on May 1, away at BankWest Stadium 7pm kickoff. 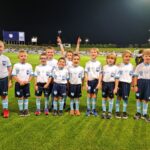 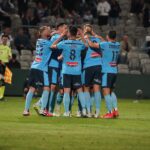