The 11+ Kids warm-up was developed by FIFA to be a fun and effective protocol for younger players (under the age of 14) to learn to move well and build upon their fundamental movement patterns for sport. A large European study involving more than 4,000 kids showed an impressive injury reduction of about 50% in those teams practising the 11+ Kids as a warm-up (Rössler et al., 2018).

One ball per player is needed. Depending on the ability, age and size of the team, the amount of space required can range from the size of the penalty area to half of a pitch. The coach should be standing in a position so all players can see and hear them clearly.

In each exercise group there are 5 activities of increasing difficulty. Coaches should only move players onto the next difficulty level when they have correctly performed the exercise in several successive attempts and when the coach only needs to make a few or no corrections.

The 7 exercises should be carried out in order and progressed relative to the age and ability of the group. Once individuals are capable of efficiently and accurately performing the movement, they can be instructed to move to the next level of difficulty. 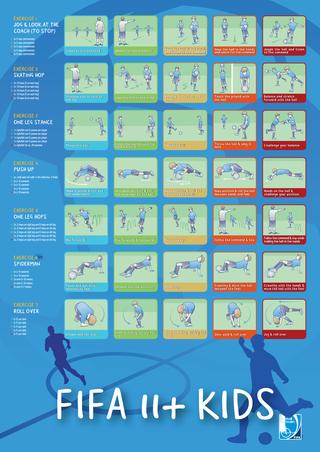 The program should be performed at least once per week to profit from an injury preventive effect. However, two sessions per week is recommended to further increase the protective benefit.

The 11+ Kids manual can be downloaded here.

If you have any questions regarding the 11+ Kids or FIFA 11+ programs contact Jubilee on (02) 9540 9400.
‘This information is provided to Sutherland Shire Football Association by Jubilee Sports Physiotherapy as part of its commitment to Shire football and the SSFA’